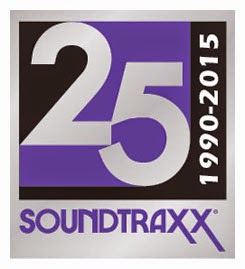 In this post, Nancy Workman, Co-owner and Vice President for Sales & Marketing, recalls how SoundTraxx got its start...

As we begin our 25th year in business, a rare bit of nostalgia creeps in….25 years! How did that happen?!

Way back in 1988, I began working for a marine electronics company in Pocasset, Massachusetts. The company primarily designed, manufactured and sold electronics for recreational marine use -- charting machines, knot meters, depth sounders, and wind anemometers. My new job entailed mostly marketing, but I was also responsible for writing the owner’s manuals that went with our products. As fate would have it, my first manual was for a series of products being developed by one of the senior design engineers -- one Steven Dominguez.

During the process of writing the manual, Steve and I became friends, and early in 1989, he approached me with a request: Would I have some time to help him market a product of his own that he had been working on? My first question, of course, was, “What’s the product?”

Please understand, I have never been exposed to model railroading. No uncles, brothers or grandparents, no neighbors, nothing in school. I really didn’t know the difference. At this point he huffed out of my office and I pretty much figured that was that. But the next day, he walked in and put a model -- an HOn3 brass Fujiama K-36 -- on my desk. As a former art major, I could totally appreciate what it represented. I said, “That’s the coolest thing I’ve ever seen” and the rest, as they say, is history.

Later that year, Steve and I attended (as registrants) the National Narrow Gauge Convention in Durango, Colorado. It was there that I fell in love with the area, the Durango & Silverton Narrow Gauge Railroad, and the modeling community. We launched our company in January of 1990, with an eye on someday moving to Durango and creating cool products for our new friends. Though the first product launched was actually not a sound system, but our Hyperlight, it began a quarter-century of innovations that we continue today.

We hope you stay tuned -- we have lots of exciting things coming in 2015! And celebrate with us by visiting our 25th Anniversary Web page on the 25th of each month for our "Silver Special" offer or announcement. For our first "Silver Special," we're offering steam and airhorn audio files as free downloads for ringtones (or fun sound effects for your computer).
at 4:02 PM No comments:

Celebrate 25 Years of Innovation with Us!

January 2015 marks the launch of our year-long celebration of 25 years in designing and manufacturing innovative electronics and sound systems for model railroads.

Throughout the year, we’ll be offering “Silver Specials” to thank you for your support. Check our 25th Anniversary Web page on the 25th of each month for a special offer, contest, raffle, or giveaway.

It all started when...


Owners Steve Dominguez and Nancy Workman launched SoundTraxx’s corporate entity, Throttle Up!, in 1990. On February 4, 1990, they debuted their first product, the Hyperlight HPL-75, at the Big RR Hobby Show (now known as the Railroad Hobby Show) in Springfield, Massachusetts. The Hyperlight was the first lighting product on the market that used a microprocessor to allow users to select and control multiple lighting effects from within one module. Modelers were able to select from more than eight effects, which included Mars/Gyralite, oscillating headlight, rotary beacon, xenon strobes, and a fire flicker effect. They also could set directional lighting and flash rates. The heritage of this product is still evident today in our line of Tsunami Digital Sound Decoders.

The Hyperlight is one of many industry “firsts” that we have developed over the past 25 years. In 1996, we released our first Digital Sound Decoder – the DSD-2408 for steam. This revolutionary product was the first DCC decoder that included both sound and lighting functions, as well as the first to feature polyphonic sound channels and Dynamic Digital Exhaust.

Today, we’ve continued to push the envelope for what’s possible with DCC to add more realism and fun to model railroading. Our Tsunami line of Digital Sound Decoders still feature many of the technologies we’ve developed and built upon since the beginning. What innovations will we bring to 2015? Stay tuned…