Jarrette is back at work following the birth of his daughter. Some of us are thinking that he is only here for time to sleep!

In this edition, we will look a little at our 20 years we have been here serving the model railroading community. We will also be featuring “A look back at SoundTraxx’ history” segment as well as 20th anniversary specials to celebrate this year.

20 Years In The Model Railroad Community:
SoundTraxx’ corporate entity, Throttle Up! Corp. was started in Pocasset, MA in late 1989. Our first product was the Hyperlight, introduced and shipped in January of 1990. This was the first lighting module using a microprocessor to control which lighting effect the modeler rather than purchasing different circuits. The Hyperlight is still evident today in our products recreating brilliant lighting effects on our Tsunami line of decoders.

In 1994, SoundTraxx moved to Broomfield, CO, a suburb of Denver. Then in 1996, we were proud to release the DSD-2408 Digital Sound Decoder for steam. This decoder was the first DCC decoder to be integrated with sound and lighting. This was also the first decoder to offer DDE (Dynamic Digital Exhaust) and introduced polyphonic sounds. No longer would one sound interrupt the playing of another sound. Next in 1997, we introduced the DSD-050 and DSD-150, smaller cousins of the 2408.

In 1998, SoundTraxx moved to Durango, CO and purchased new SMT equipment allowing us in 1999 to introduce the ‘LC’ series of decoders, the first DCC sound decoders available under $100. In 2001, we moved to our current 6100 sq. ft. home in the Durango Tech Center. In 2004, Blackstone Models was created. In 2005, the first 16-bit Tsunami steam decoders were released and in 2008, the diesel versions were released.

SoundTraxx is proud to manufacture all of our Tsunami decoders here in our facility in Durango, CO, USA. SoundTraxx employs a full-time staff to assemble, test and package every decoder that we build here. Our customer-service department will do everything we can to ensure your enjoyment. We have had 20 years of innovation and helping make our hobby more enjoyable and fun, and we are looking forward to the future. Thank you to everyone who has contributed to our longevity and enjoyment in the hobby.

New Product Announcements!At SoundTraxx, we value our customer’s opinions. We take every call to heart with suggestions to help make the model railroading experience better for everyone. As a result, we have added to the Micro Tsunami product line-up. We have added the EMD 645-Turbo (p/n 827002) and the EMD 710 (p/n 827003) to the TSU-750. We are also proud to announce a new sound added to the Micro as well. 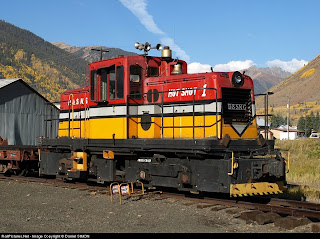 This is a GE ‘Center-cab’ Cummins diesel prime mover (p/n 827014), ideal for GE 45-tonners, ‘center-cab’ switchers and other light industrial switchers. These new sounds will be shipping soon!

For our Blackstone Models line, you now have a chance to voice your opinion to us as well. We are conducting a survey about possible future products. The survey is linked from our homepage, http://www.blackstonemodels.com/ . Please take the time to help us plan out future releases.
at 2:55 PM No comments: