With the summer over, cooler temperatures, and the kids back in school, it’s time for model railroading.

We have some exciting news on the Blackstone Models front that we announced at the National Narrow Gauge Convention in Pasadena, CA. While there, Jarrette and George got to see quite a few steam locos and visit a couple of model railroads on the road trip.

Last, our Tech Tip will involve installing decoders and what it means to isolate the motor.

We are proud to announce the road numbers and part numbers for the upcoming K-28 and K-36 projects. These are currently on schedule for a late 2015 release. Visit our website for more information:
These are now available for advance reservation through your favorite hobby shops.

ProTraxx, our new HOn3 track system with integrated roadbed, has been very popular with modelers. We also are working on a turnout design. When we are further along with this part of the ProTraxx product line, we will make the official announcements with the details. 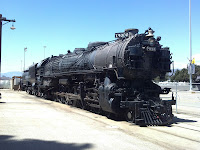 This year we were on display again at the National Narrow Gauge Convention in Pasadena, CA. This trip was a little different as George drove down early to present a few clinics in the area.

Special thanks goes to Milepost 38 Model Trains in Anaheim Hills and Arnie’s Trains in Westminster for hosting free Tsunami demonstration clinics in their stores. While he was there, George also visited Reed’s Hobby shop in La Mesa (San Diego area), Railmaster Hobbies in Bellflower, and Train Shack in Burbank. 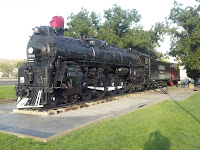 After Jarrette arrived on Wednesday morning, they drove up to Pasadena, passing Pomona on the way. With the recent announcement that the Union Pacific has started the restoration of the Big Boy #4014 at the fairgrounds, they decided to stop and see it before it moves to Cheyenne for the complete overhaul. 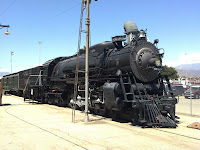 They have quite a few locos at the fairgrounds, all of which are in good shape. Besides the Big Boy, they had UP 4-12-2 #9000, Santa Fe 4-6-4 #3450, and a UP Centennial Diesel #6913 and more. One of the volunteers even let them up in the cab of the #4104 to sit in the engineer’s seat. For more information about this loco collection, or to make a donation to the museum, please visit www.railgiants.com. 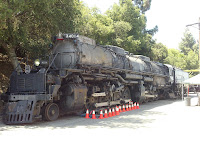 During one of the convention breaks, they came across Travel Town at Griffith Park in Los Angeles, so they figured they’d stop in. There were numerous steam locos on display, including small 4-4-0, a Heisler, a Shay, and even a diesel from the California and Western “Skunk” Train that Jarrette had ridden behind in his youth.
For more information or to donate, visit http://traveltown.org.

While at the convention, the Slim Gauge Guild was open for a layout tour in Pasadena. There is a HOn3 layout and a Sn3 layout on display, with many examples of fine modeling and scenery. Included on the HOn3 layout are Durango, Salida, the famous Black Canyon Bridge outside Gunnison, Ophir Loop, and Lizard Head Pass. 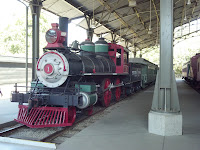 The HO standard gauge layout even features the suspended bridge on the Royal Gorge Route. For more information, including the open house schedule, please visit www.slimgaugeguild.com 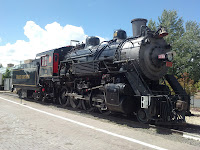 George and Jarrette also had fun at the convention. They especially enjoyed seeing the modeling talent on display with the HOn3 North Coast Narrow Gaugers modular layout and the On30 collection of five clubs. As always, it was fun for them to see many fellow modelers and friends enjoying the show, including TV star and model railroader Michael Gross. If an opportunity arises to attend this show, be sure to go. It is fun and inspiring. 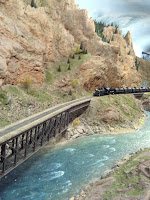 Our travelers also stopped at the Grand Canyon Railroad in Williams, AZ to see retired 2-8-0 Consolidation #29 on display at the depot, looking like she could be fired up at any time.


Unfortunately, time was a factor, so they did not have time for a ride. For more information on this scenic trip, please visit www.thetrain.com.


After lunch in Flagstaff, George and Jarrette watched a few modern BNSF trains run through the mainline for about 20 minutes and saw five trains pass. This is part of the LA to Chicago mainline, so it was definitely busy.

It was a seemingly long road trip, but they were able to see many remnants of steam railroading, as well as examples of modern-day railroading along the way. 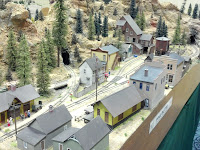 When installing a decoder into an analog (DC or direct current) locomotive model, it is important to determine the flow of electricity through the model, from the right rail to the motor and lights, and then to the left rail.

Most modern releases have electricity flowing through a small circuit board that has a plug that the decoder can easily fit into. Isolating the motor is as simple as unplugging the "dummy" board. This board internally connects the track power to the motor and light circuits.


On older models and brass, isolating the motor is not as simple. In many cases, the track power is picked up through the wheels and transferred to the frame, making it "hot." The loco is hot to one rail (let’s say positive lead or +), while the tender traditionally picks up power from the other rail (negative or -).

The motor in the loco has one terminal grounded to the frame to pick up the positive rail power. A single wire is then connected to the other terminal of the motor and connected to the insulated drawbar, from which the negative power from the tender frame is transferred. 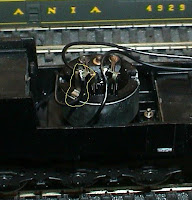 Unsolder or cut this tab. Test that the motor is isolated by using a multi-meter set to continuity tester, and touch the terminal with one lead, then touch the other lead to the frame. There should be no conductivity now. Attach a wire to the motor terminal that now can simply be routed to the orange wire from the decoder. (Or optionally through our DBX-9000 loco-to-tender wiring harness, P.N. 810132). Since the other motor terminal already has a wire on it to the drawbar, disconnect from the drawbar and this can be rerouted (through the DBX-9000) to the gray motor lead from the decoder.
On some of the older Athearn "Blue Box" Diesels, this connection to the frame was two cut out tabs from the clip on the bottom of the motor.

To isolate the motor in this case, the tabs would need to be removed, and a small layer of electric insulating tape can be laid down under the motor as insurance. Then, simply solder a gray motor lead to the clip and run this to the decoder.

As an insurance policy, run some insulative tape under the motor before reinstalling to prevent any accidental contact.

Now the motor is isolated from the track power-carrying frame of the loco and will only run based on the power sent to it directly from the decoder through the wires.

This is just a couple of examples, but applying these techniques to the next install will help make installation much easier, and prevent a Trouble Code 11 (motor connection fault) from flashing the headlight.