Happy 2013!
It’s hard to believe it’s 2013 already! With the New Year, we’d like to thank each of you for helping make 2012 another successful year! We are looking to the future, so help us make 2013 our best ever! We have our new state-of-the-art manufacturing equipment in place and operational. With this in place, we can shift our sights to the future.

Its NFL Playoffs again, and this year, the New England Patriots and again hosting the Baltimore Ravens.  This year, in anticipation of the event, we had some fun at the office ganging up on Allison and her lone 'paid' Ravens supporter!

In this post, we’ll say goodbye to a member of the SoundTraxx family, finish our Tech Tip discussion on consist lighting and we’ll visit Yankee Dabbler’s new store in New Jersey.

Farewell and Good Luck!
One of our employees, Rebecca Balboni, decided to leave the fold here at SoundTraxx and pursue a pro cycling career. She has competed across the states and has had great finishes. As she leaves to train, we are hoping to see her at the Olympics in Rio in 2016. If you are interested, you can follow her progress from her blog at http://www.rebeccabalboni.com/

Starting this month, we will be sending out an official customer newsletter. This will be similar to the blog, but more specifically SoundTraxx and Blackstone Models news only. You can sign up by sending an email to customernews@soundtraxx.com. 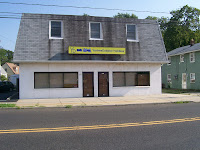 Yankee Dabbler has been a strong dealer for SoundTraxx products since April 2009. As a full-line hobby supplier, they have been appearing at shows and selling on the Internet for many years. Now, Bob and his son Mike have opened a new retail store in Bellmawr, NJ.
Catering to the seasoned modeler, this full-line hobby shop is filled with your critical model railroad needs, including SoundTraxx, and soon Blackstone Models! They are located at 101 West Kings Highway in Bellmawr and are open Tuesday through Friday from 11 a.m. to 7:30 p.m., and Saturday from 10 a.m. to 6 p.m. Contact them at (856) 312-8084 and they are always open on the web at www.yankeedabbler.com.

Tech Tip: Lighting for a Consist, Part Deux
Last post, we took a moment to understand how consists are set up using CV 19, 21 and 22. This time, we will look at the lighting specifically and see how this method can be used to better enhance the lighting.

First, let’s look at what lights could be on display of any loco. For all locos, there is the headlight and reverse light. Also in the diesel era, there are auxiliary warning lights, such as Mars light, rotary beacon and ditch lights. As the Tsunami can do all of these and more, the key is to determine which function (F0f, FX5, etc) does what and how these lights are displayed on the loco, or group of locos. For an example for this exercise, we’ll use two locos: a lead loco with ditch lights, and a trailing loco with a rotary beacon. 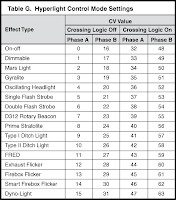 Lead loco needs to be set up for the lights to operate consistently. For alternating ditch lights, it is common to assign them to a single function button so that they both turn on and off together. In this example we’ll select F5. To do this, a few CVs need to be set, CVs 39, 40, 51, 52. CV39 controls what happens when F5 is active. Since we want both ditch lights on F5, set CV39 to 6 (2 + 4). Since CV40 governs F6, we’ll set that to 0. After this, F5 will illuminate both ditch lights, while pressing F6 will do nothing. To set up the alternating ditch lights, set CV51 to 41 and CV52 to 57 (See User’s Guide for details).

On the trailing loco, the rotary beacon will be set to F6. Typically, it would be wired up to the green wire, but if not, it can be reassigned by changing CVs using a similar method as outlined for the lead loco. Because we’ll assume it is wired to the green wire, the only CV programming for the lighting effects necessary on the trailing unit is to set up the rotary beacon. To accomplish this, set CV52 to 7.
To set up our consist, for this exercise, we’ll look at the lights only. Referring to Section 5.9.1 of the General Code of Railroad (GCOR) rulebook (also known as Rule 17), the lead loco should display the headlights on and dimmable, as well as the ditch lights on. The reverse light would not illuminate because it is facing into the rear unit. The trailing unit would display the reverse light, and optionally the rotary beacon (there is not a universal rule for warning devices, such as our rotary beacon on trailing units, so in this exercise, we will illuminate it because it looks cool. Refer to your prototype railroad’s rulebook for detailed information). Using the method described in our last post, we will set the CVs. First, select a consist address and assign CV19 accordingly. For the lead loco, set CV 21 to 86 (2 + 4 + 16 + 64) and set CV22 to 1. Now set up the trailing loco by setting CV21 to 96 (32 + 64) and CV 22 to 2.
﻿Now activate F0, F5 and F6. Your headlight should be on when moving the consist forward, the ditch lights will be illuminated and the trailing loco’s beacon will be on. Pressing F7 will dim the headlight. Press the horn (F2) to initiate the alternating flashing ditch lights. Reverse direction and the headlight on the front unit will go out while the rearward facing light on the trailing unit will come on. 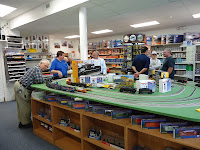