It is time for another installment of SoundBytes. We have some trips planned in the near future including a trip to Colorado Springs to give a Tsunami clinic. Also, we will be displaying at the 30th National Narrow Gauge convention in St. Louis, MO. We will discuss a bit about the latest from Blackstone Models. For out Tech Tip, we will look more in depth into Dynamic Brakes and how they work for diesels.

Show Season
Show season is upon us. George will be traveling this weekend to Colorado Springs to give a Tsunami sound presentation at Custom Railway Supply in Colorado Springs Saturday Morning, August 21st at 9:30am. If you are able to attend, please do so as it will be fun and informative. http://www.customrailwaysupply.com/
After a busy NMRA National show, we now get to go to St. Louis, MO and set up at the 30th National Narrow Gauge Convention. This is usually a great show to display Blackstone Models equipment and to talk with many of our “Narrow-Minded” friends about current and upcoming projects. As always, we enjoy speaking with our friends in the modeling community. If you are able to attend this show, or are in the near vicinity, come by and visit. Also, Jarrette will be giving clinics on using Tsunami sound and Jeff will be giving a peek into the world of Blackstone Models. Check the clinic schedule to find out times and locations of these informative and fun clinics! http://30ngconvention.org/ 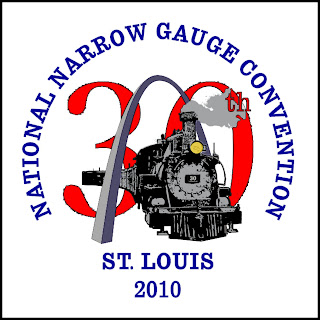 Blackstone Models
We have been shipping out our K-27 locomotives and our double-deck stockcars as fast as we can. We have a large demand for these items and quantities are limited. Be sure to check with your dealers to ensure you get your models before they are sold out! 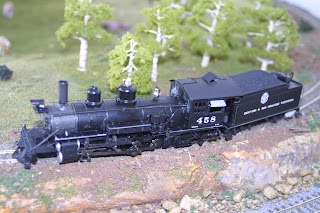 We also have passed the deadline for guaranteed reservations on the narrow frame and frameless tank cars. We have very limited quantities available, so be sure you have ordered yours to guarantee you receive these quality models.
Our second set of sample C-19s have arrived and we are extensively testing these models to ensure that the quality we expect is present and that these models run as good as our K-27s. These models have been great so far, we want to push these to the limits to be sure you can enjoy running these locomotives!

Tech Tip:
For this Tech Tip, we will discuss dynamic brakes and how they work on your Tsunami decoder. For those who may not know what Dynamic Braking is, let us explain.
Locomotives are not direct drive like our cars and trucks. Since they need much more horsepower to pull that much tonnage, they rely on electric motors (Traction motors) on the axles to turn the wheels. An electric generator (Main Generator) attached to the diesel engine (Prime mover) supplies the electrical power to these motors. The engineer regulates how much power is applied to the traction motors from the cab for pulling trains. Dynamic braking was developed to help reduce the wear on the train’s brake shoes while helping to maintain better control of the train when drifting downhill or negotiating territory with significant undulating grades. This method of braking turns the traction motors into generators, using electro-mechanical force to slow the rotation of the locomotive’s wheels and causing resistance to the momentum of the train downhill. The extra electric energy generated by these traction motors is dissipated in a resistor grid located in the locomotive. The dynamic brake fan sound on the Tsunami is representing the dedicated fan (or set of fans)

that cools these resistor grids to prevent thermal damage to them.
Each locomotive manufacturer had a different way of addressing the locomotive’s needs for the dynamic brake application. Tsunami allows you to replicate any of these options to create a more realistic sound decoder. Since the prime mover would not be generating power to pull the train anymore, most EMD locomotives would drop the diesel engine RPMs to idle to save fuel. As an exception to that rule, Southern Pacific and Missouri Pacific would have the prime mover on their locomotives drop to Run 4 so there was enough power generated by the main generator to keep the traction motor blowers running to help prevent the traction motors from overheating. ALCO and GE had these fans directly driven from the crankshaft of the prime mover and would then have to crank the prime mover up to Run 8 or full throttle to keep the fan turning as fast as it can and cool the resistors.
Following the Tsunami Diesel User’s Guide, available here: http://www.soundtraxx.com/manuals.php, these options can be set up in your diesel Tsunami decoder to follow prototype practices and therefore result in more realistic operation. F4 by default controls the dynamic brake sound. CV116 sets up a few things, including auto-notching or manual notching, auto start, and interlock as well as the dynamic brake feature. Start by determining the value for CV116 that controls the other features first. Next, determine how your prototype’s dynamic brakes behaved. Default settings for Tsunami simply have the fan sound play. If you want the prime mover to drop to idle, add in 64 to the pre-determined value for CV116. If you want the dynamic brakes to go to Run 4, add 128 to the value for CV116. If the prime mover’s RPMs need to go to Run 8, add in 192 to the value in CV 116.
With many railroads using locomotives from different manufacturers, following this procedure creates realistic operation options allowing the unique locomotives to behave differently when in a prototypical consist. A neat addendum to this is in a case where a locomotive (Or locomotives) in the consist does not have dynamic brakes. 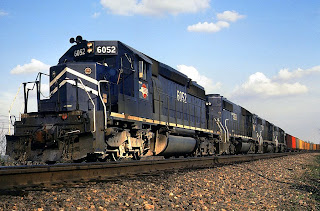 The locomotive in question, when coupled to a few locomotives that did have dynamic brakes, would drop to idle to save fuel, but there were no fans, so set CV116 accordingly and set CV 133, Dynamic Brake fan volume, to 0. This way, when in a consist, this locomotive will behave properly in accordance with the prototype, and there will be no Dynamic Brake fan sound! This feature found only in Tsunami helps create the realism we are all striving to achieve on our layouts!
at 12:46 PM No comments:

This has been a seemingly short amount of time since our last post. We have been to Milwaukee for the National Train Show and now it is August! Also, Blackstone Models K-27s and Double Deck Stock Cars arrived here on July 29th. For our Tech Tip, let’s take a look at the UP GTEL Turbine decoder and some of its operational capabilities!

On another front, Allison got married on July 24th at the Durango Mountain Resort. It was a rainy day, so the ceremony was held indoors, but it was a nice ceremony anyway. We wish her well in her new married life! 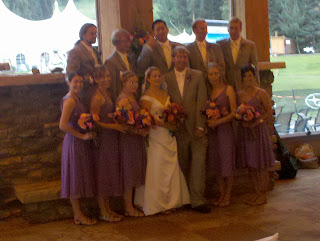 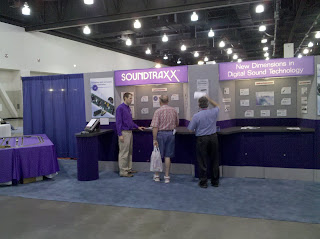 We want to extend a big Thank You to the many people who attended our clinics at the show. Both nights of clinics were full. 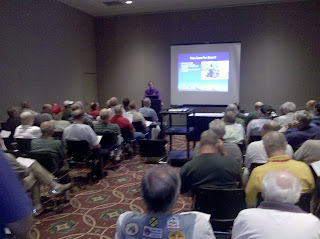 After a long week of clinics, convention and fun, we were glad to be back at home!
Also, we are working on our “Official” announcements from the show. To keep apprised and up to date with the official news, be sure to sign up for our customer newsletter. Send an e-mail to customernews@soundtraxx.com with “Subscribe” in the subject and we will add you to our e-mail list. 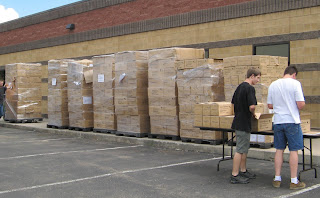 We received many pallets of product that we will now test and inspect to be sure we catch any issues before they leave our facility. 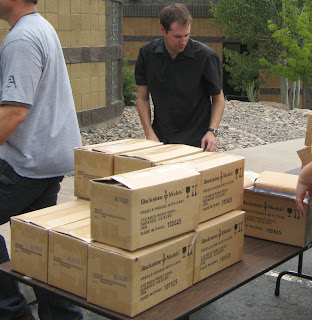 These should be shipping in a week or so.

Tech Tip:
Our Tech Tip will briefly discuss the many operational features we have implemented into the GTEL UP Gas Turbine Electric decoder. We have researched the prototype using the operator’s manual, in print as well as having worked closely with former UP shop technicians who used to work on and with these large beasts to ensure an accurately operating decoder. Lets get to some of the details…
The Turbine locomotives had a small diesel engine on board to help hostle the locomotive around the shops as well as start up the turbine. Therefore, the Tsunami has both a diesel sound and a turbine sound built in. Depending on the version of the turbine used, this diesel engine may shut off when the turbine is active, or run constantly regardless of the turbine running or not. We have allowed the user to select either option to more accurately match your prototype. 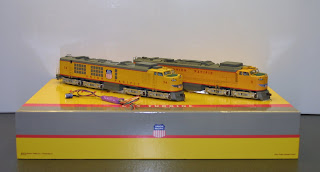 It has been written that the dynamic brakes also could have been addressed in a few ways. One publication mentions that on long runs downhill, the engineer could turn off the turbine while applying the dynamic brakes to help conserve fuel. While this is technically true, the technicians said no one ever actually did this in operation because they could hit a section of flat track and lose power to pull the train. The turbine engine took a long time to start up, so the train would be dead waiting on the turbine to get started again. We have incorporated either method for dynamic brake application, to allow the modeler to decide how he or she wants the locomotive/sound to behave when the dynamic brakes are applied.
The Tsunami has 5 operating modes to choose from. These modes are automatic, semi-automatic and fully manual along with semi-automatic and fully manual with optional speed limiting. Automatic mode does exactly what it says. As you increase the throttle, the diesel engine will rev up, then transition to the turbine and rev up from there as the speed to the model is increased. The turbine will remain on, even when stopped, but will time out after a predetermined time (Default 10 sec) while sitting and no functions on. Semi-automatic mode utilized auto notching, but requires the F9 to turn on the turbine and F10 to turn the turbine off. Fully manual uses F9 to increase the engine up through the diesel and initiates the turbine and increases the turbine from there, while the F10 decreases the RPM of the turbine and shuts the turbine off. Because the diesel engine was barely powerful enough to move itself without a train, we have also incorporated speed limiting to regulate the speed of the motor while the diesel engine is operational.
All of the options discussed here can be set up using CVs. We have made a separate manual for the turbine that can be downloaded free from our website. http://www.soundtraxx.com/manuals/Users%20Guide%20UP%20Turbine_1.14.pdf

Utilizing these options, you can simply enjoy running your Tsunami-equipped Turbine locomotive, or operate the locomotive as if you were running the real thing.