With all that has been going on lately, time seems to slip away! Here it is, the middle of August already! The good news is there is less than a month until the next National Narrow Gauge Convention in Seattle, WA. The NMRA Show this year in Grand Rapids was good. We were able to meet up with many of you and discuss our new products and answer questions. The show was well attended and we had a great time. Thanks to those who did make it out. In this edition, we’ll discuss the newest SoundTraxx and Blackstone Models items and in our Tech Tip we’ll talk about motor control and speed steps in DCC.

SoundTraxx
With the release of the new Blackstone Models passenger cars, including the new Chili-Line 3-car set, we have been selling many of the new lighting decoders specifically designed for these cars.

This lighting module easily fits under the roof and provides even and adjustable lighting for the detailed interior of these cars, and can be adapted for use in any HO passenger car. For more information: http://www.soundtraxx.com/accessorydecoders/accessorydecoders.php
With the many new announcements from Athearn in their Genesis line, we have added in a TSU-GN1000 for EMD 645 non-turbo (p/n 828058) to easily fit into the Genesis GP-15s and will fit into the new Genesis GP38-2s.

This drop-in decoder will replace the factory circuit board without the need for additional resistors for the lights.
For N-Scalers, we have been getting many requests and interest about our SurroundTraxx sound system. This system allows the sound to travel around the layout with the loco, providing full-scale sound, including an under-layout subwoofer, for up to 99 locos! While this system is designed with the small scales in mind, it can be utilized in any scale too! More information can be found here: http://www.soundtraxx.com/surround/
We also have the TSU-750 now available in the dual 567 for N-Scale E-Series locos (p/n 827018) and the UP gas turbine (p/n 827015) for use in N-Scale brass or Con-Cor Models. These are available to ship to your favorite dealer now!

Blackstone Models
The new Denver & Rio Grande Western Hoppers have been very well received. We have been shipping many of them, so don’t be left out, order yours today from your favorite hobby dealer.

These Pullman green cars come in a discounted 3-pack with the signature bay window factory-installed. These cars are awaiting the 3-pack boxes before they will ship. We expect these to be shipping within the next few weeks. 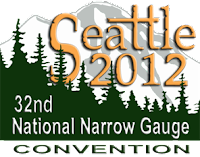 Blackstone Models focuses on Narrow Gauge in HOn3, so this is a great show to attend see what’s available in HOn3. Come by if you’re nearby and see what we have in store.

Following this is the iHobby show being held this year in Cleveland, OH on October 12-14, 2012. (http://www.ihobbyexpo.com/) This show is primarily catering to the hobby shop owners, but is also open to the general public on Saturday and Sunday.

With many model railroad related manufacturers and other activities there, a good time is sure to be had. If you are in the area, be sure to come by and see us!

Tech Tip:
DCC was adopted because of the standards established by the NMRA. Within the standards, DCC has improved its technology over the years, and are still able to conform to the standards. Included in these improvements are more functions, more realistic sound, better consist methods, and most important, throttle response.
When DCC was introduced, motor and light control was pretty much it. At the time, the technology was young, and therefore only allowed 14 speed steps. What this means is that the throttle from 0-100% was divided up by 14 increments, or a 7.1% throttle change. This was crude and could cause clearly visible changes in the speed. Adding in momentum did make the changes in speed less obvious, but did not alter the amount of change in speed. There were no in-between speeds.  As the technology progressed, DCC saw the introduction of 28-speed step mode. This divided 0 to 100% throttle up in increments of 28, or 3.5% change, allowing finer throttle adjustments. Following this came along 128-speed step mode, dividing up 0 to 100% throttle in 128 increments, or 0.78% change, giving much finer speed control than ever before in DCC. Going one-step further, the Tsunami decoder has 2048 internal speed steps. This allows the decoder to use BEMF and momentum along with the throttle setting to step through the table, giving ultra fine motor control. 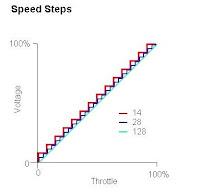 When using DCC, be sure for the best control of the decoder, that your DCC system and Throttle is set to 128 step mode. To run in any other modes (unless necessary by system limitations) is doing yourself a disservice.
Another thing to keep in mind when adjusting speed control is the DCC track voltage level. A decoder works the motor through Pulse Width Modulation (PWM). This means that the motor is seeing momentary pulses of rectified track voltage (power is either on or off). By varying the length of time this power is on to the motor, the motor, in essence, turns faster or slower.

Higher track voltages translate into faster motor speeds throughout the speed range because of the higher power pulses sent to the motor. By lowering track voltage to 12-13v from 16-18v in 128-speed step mode, your loco will run much smoother, draw lower current, operate at cooler temperatures and the decoder will still be receiving the power it needs to operate. Spending a bit of time looking into these aspects of DCC, the results will be well worth the effort.
Next post, we will discuss setting up your own speed table to limit loco top speeds.