These should arrive soon at your favorite dealer soon. The delivery truck showed up and we all went out and organized the boxes by part number. We then open and inspect each box to ensure that the cars that we received and ship are in excellent condition.

We also inspect the cars for accuracy during assembly. Then we put them in the warehouse and begin shipping to the dealers. This process usually takes half a day. As you can see, we get quite a few cabooses to ship all around the world.
Trainfest 2009
We were in Milwaukee this past weekend for Trainfest 2009. This show is one of the largest shows in the USA. Many manufacturers and vendors attend this show annually. 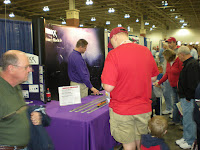 The show started Friday night with a manufacturer meet and greet. This portion of the show layout is open to modelers who have purchased tickets for this special event. The rest of the show opened Saturday morning and ran through Sunday evening. We were able to meet with many of our customers, which we enjoy.

We also got to visit the North American Prototype Modelers Club layout located in Milwaukee. This layout is impressive, and there is much to still get finished. 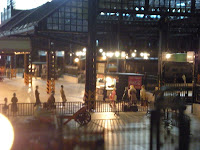 Thank you to the NAPM members for their hospitality. You can see some of their work on the website, http://www.napmltd.org/.
Next up is the Oklahoma City Show, December 5th and 6th. Details can be found at http://www.okctrainshow.com/. Be sure to come by and see us.

•Turn on the prime mover (F9)
This will start your operating session. Allow the air brake lines to pump up and idle for a few moments to get the loco to operating temp.
•Turn on lights (F0, F5, F6)

These allow you to see, but more importantly, allow others to see your train coming.
•Whistle (horn) signals (F2&3)
Following whistle signals will alert crew on train and ground as to your train’s movements. See chart at the end.
•Turn on the bell (F1)
The bell helps alert anyone within the area to hear and look for moving trains.
•Release the engine brakes (F11)
Setting the brakes holds the train still while crew are working. Releasing them in a separate step will sound the “hiss” of released air from the brakes.
•Ramp engine to notch 2 (F9)
Increasing the throttle will allow just a bit more power to the traction motors on the trucks than when in idle.
•Gently increase throttle to pullout the slack (Speed Knob)
Start off slow to pull the slack out from the couplers. If you just crank up the throttle, the tons of weight behind the locomotive will break the couplers and cause the train to go into emergency.

•Ramp prime mover to run 3 (F9)
•Increase throttle (Speed Knob)
After the slack is pulled out from the couplers and all cars are moving, now you can gently accelerate as the trackage dictates. If in a yard, proceed at yard speed limits, however if out on the main; accelerate slowly until reaching maximum allowable track speeds.
•Increase to run 4 (F9)
Once clear of the yard limits, you can then begin to get the train up to speed.
•Blow a grade crossing
Following FRA rules, every public road crossing needs a whistle signal blown. 2 long blasts, 1 short blast then 1 more long blast. For other non-public crossings one long blast and one short would be appropriate. See chart at end.

To simulate heavy train, pulling up a grade:

•Continue running engine to run 8
The train will need all available horsepower to pull the train up the hill.

Once the grade is crested, you will need to use the brakes to get it down the hill.

•Keep train at steady pace (Speed Knob)
The train as it crests the hill, will begin to bunch up on the locomotive(s). Balancing the train over the crest can be a tricky endeavor while half needs to be pulled up; the other half is trying to roll down the hill.
•Turn on dynamic brake (F4)

Dynamic brakes use the traction motors as generators, and as a result of the magnetic field, cause resistance on the axles. This helps the locomotive keep control of the train in conjunction with the train brakes and locomotive brakes. When dynamic brakes are used, each locomotive manufacturer addresses the cooling in different ways. EMD, for example, runs the diesel prime mover to idle before the dynamic braking effects and cooling fans activate.
•Turn on brake squeal (F11)
When the train goes down the grade, try to apply the brakes sparingly to keep them from overheating. This will also help keep the train under control while running downhill.
•Turn off dynamic brake (F4)
When level ground is reached again, turn off the dynamic brakes. When the dynamic brakes are turned off, the prime mover on an EMD loco will return to the last notch setting that was applied before. Now you may need throttle again to pull the train along the level ground.

Arriving at next station or siding for meet and shutdown sequence:

•Gently reduce throttle (Speed Knob)
•Ramp down prime mover (F10)
When approaching the next stop, you will want to slow the train down to control the cars if you should need to traverse any turnouts in the arriving yard or take a siding. You can keep the prime mover up if you desire to have additional power available if needed to follow the path set by the yardmaster.
•Ring the bell (F1)
When in a yard, around public or railroad personnel, the bell warns those on the ground to look for a moving train.
•Apply the train brakes (F11)
By applying the brakes, you can control the location for the train to stop without touching the throttle. This will allow you to pinpoint a stop without needing to ‘kick’ the throttle then overshoot your spot. Once the train is stopped at the proper location, turn down the throttle to stop.
•Whistle signal for brake/stop (F3)
A short blast allows those on the ground to know that the locomotive/train is stopped. See the chart below.
•Once stopped, reduce throttle and diesel RPMs to idle. (F10 + Speed Knob)
This will allow the locomotive to be stopped fully. The locomotive drops to idle.
•Turn off diesel Prime mover (F10)
When ready to de-bark the locomotive, we can shut down the locomotive’s prime mover. This will stop the locomotive for the next crew.