It’s time for another installment of SoundBytes. This time we will visit the SoundTraxx and Blackstone Models booth at the 29th National Narrow Gauge Convention. We will also share with you the most recent Blackstone Models product announcements. Finally, our Tech Tip this time will focus on consisting locomotives with sound.

As previously mentioned, we will be visiting several hobby shops in the Los Angeles/Southern California area and in the San Francisco Bay area. On Thursday night, Oct 1, we will be giving a SoundTraxx Tsunami clinic at Milepost 38 in Anaheim, CA.

On Friday, Oct 2, we will be giving a clinic in conjunction with Allied Model Trains in Culver City and The Original Whistlestop in Pasadena at the Radisson in Culver City, CA. On Sunday, Oct 4th, we will be setting up at Just Trains in Concord for their annual Open House. Come by and see us. For more details, please contact these hobby shops for times and to sign-up, space may be limited.

The end of summer also brings about an exciting time for the model train community, Train Show season. This year, we begin the season with a trip to the 29th National Narrow Gauge convention in Colorado Springs. This year, the convention ran from Wednesday, September 16th through Saturday, September 19th. This convention is a big one for us, especially with our Blackstone Models in Hon3. Being just a few hours away, driving gave us the ability to bring
more things to show.

The HOn3 layout constructed by Allison was on display and running trains in the booth. A display computer showed the various CAD drawings of the C-19 locomotive and other upcoming Blackstone projects as well. On display were pre-production samples of our caboose, economy door boxcar and the first sample of the drop bottom gondola, along with our other currently available rolling stock. 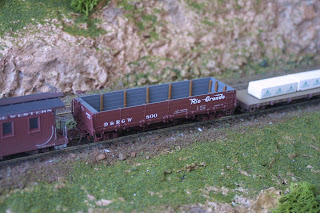 This sample was custom painted for display purposes only and may vary from actual production models. We also brought along a section of the large SoundTraxx booth for displaying Tsunami sound decoders as well.

We had the opportunity to talk with many of our customers who had many good things to say, as well as many suggestions for the future products we should consider offering. Spending time with the customers is always one of the more enjoyable aspects of being in this business.

At this convention, many manufacturers of narrow gauge equipment take this time to announce new products and we were no exception. A while back, we had announced our intention to produce tank cars. These will be done in the narrow frame

A matrix for road name and numbers was finalized in time for the show. Hobby shops are taking pre-orders now. Along with the sample of the drop bottom gondola, we also had displayed the first sample of a new rolling stock announcement, a double-deck stock car. This car was designed with a middle deck to load sheep with 2x the capacity as a normal stock car. Road numbers and paint versions have not been finalized yet.

Our final announcement we had was to let everyone know that we are in fact currently researching and designing the Jackson and Sharp open platform passenger cars. These are still under development, so many details are yet to be determined, including paint schemes and road numbers.

As you can see it will be a busy and exciting year for Blackstone Models. Many thanks to you who have helped support this growing product line!

Diesel locomotives were designed to connect multiple locomotives and operate as though they are one unit. Steam locomotives too were consisted, but required 2 full crews to double head a train. Consisting multiple Tsunami-equipped locomotives appears to be complicated to some, but really it is not difficult. Following these techniques, you should be able to consist any number of locomotives with ease.

Advanced consist addresses range from 1-127. This value is stored into CV 19. For example, let’s use consist number 45. Any locomotive facing forward would have CV 19=45. If the locomotive will be traveling backward in the consist, add 128 to the value. In our example, any unit facing backwards, CV 19 should be programmed to 173. (45+128=173) This can be set for any number of locomotives within the limits of a DCC power booster. Many command stations can set up advanced consists as well, be sure to check the DCC system’s documentation. Now the locomotives will all respond to motor commands as one unit, but there are no functions working yet.

Following this chart, you will ‘turn on’ any function for any unit as desired. Simply determine which functions will be active and add up the associated values to calculate the final value of each CV. F2 (horn) has a value of 2 and F3 (short horn) has a value of 4. If the lead unit will use the horn, add 6 (2+4) to the value in CV21. Add any values associated with the functions you want active. 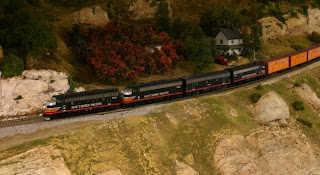 Last, we look to the trailing A-unit. For this unit, we will have the F0f (which works based on the direction of travel for the locomotive, not the consist) dynamic brakes, mute, RPM+, RPM- and F11 brake active while all else is not applicable. In this case CV 21 will be set to 28. CV22 will be set to 137. 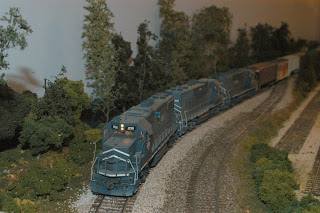 This should set up your consist to operate as though it is one unit. Each time a consist is broken up and re-assigned, the function CVs may need to be changed. Following this method, setting up all of your consists should be trouble-free.

We want to issue a special “Thank You” to Dave Houston of Daylight Sales, a SoundTraxx and Blackstone Models dealer in the Sacremento, CA area, for sending us the photo of his F-units on his home layout.

Attention modelers in the southern California area! SoundTraxx personnel will be in your area October 1-5.

Everyone is invited to attend a SoundTraxx clinic and meet with SoundTraxx personnel. SoundTraxx Tsunami clinics will be held Thursday evening, October 1 at Milepost 38 Trains in Anaheim and Friday evening, October 2 in conjunction with Allied Model Trains and The Original Whistlestop at a central, convenient meeting site in the Los Angeles area for either store. Please contact any of these fine shops for more details and a sign-up sheet.

On October 4, we will be participating in the Open House for Just Trains in Concord, located in the San Francisco area.